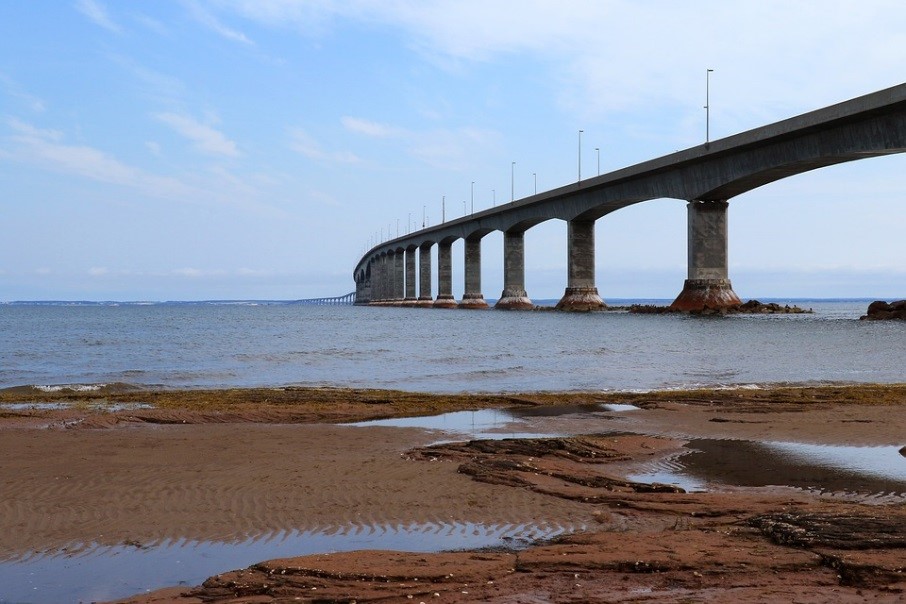 How does climate change affect bridges?

The Intergovernmental Panel on Climate Change (IPCC), created in 1988 by the World Meteorological Organization (WMO) and the United Nations Environment Programme (UNEP), found out that intensity of precipitation, particularly the proportion of total precipitation that falls during heavy events, has increased and is very likely to continue to increase in the future.

Available research indicates a tendency for an increase in heavy daily rainfall events in many regions, including some in which the mean rainfall is projected to decrease. In the latter cases, the rainfall decrease is often attributable to a reduction in the number of rain days rather than the intensity of rain when it occurs.

The IPCC also found that higher precipitation intensity could increase the risk of flooding and they identified bridges as one of the infrastructures most at risk due to climate change.

Its conclusions coincide with the results of another study carried out by the World Road Association (PIARC). In collaboration with road administrators from thirteen states on five continents, they concluded that increased precipitation intensity and frequency can cause severe scour on bridge pier foundations and abutments due to increased river flow.

In order to assess the vulnerability of a bridge to climate change, other factors are identified that should additionally be considered. These significant effects could be:

Although climate change mitigation must be a priority and a global goal, it is expected to continue to create significant stress despite the efforts made; therefore a new and more ambitious strategy for the adaptation of infrastructure to climate change is needed. This is precisely the European Commission’s vision on this issue, as stated in the Commission’s Communication for The European Green Deal (COM(2019) 640). This document further underlines the importance of ensuring that throughout the European Union (EU), the decision-making entities can access data to integrate climate change into their risk management practices.

In recent years we can find specific reports on the vulnerability of bridges to climate change drawing attention to the need for both designing and adapting bridges taking this factor into account. One example is the report Impacts of Climate Change on Transport: A focus on road and rail transport infrastructures published by the Joint Research Centre (JRC), which carries out an assessment of the vulnerability of transport infrastructures to future climate changes in EU countries. In the case of bridges, heavy precipitation and its ability to induce scouring is identified as the greatest risk faced by this type of structure once again.

Through initial quantitative assessment of future vulnerability and adaptation of river bridges under future climate changes and changing river peak discharge patterns (100-yr-return peak river flow), this report estimated that 20% of EU river bridges may need to be protected through adaptation measures in the coming decades to mitigate the risk of scouring associated with increased river flooding. This percentage changes from one country to the other and the risks are estimated to be highest in Austria (60%), Portugal (50%), Spain (42%) and Italy (39%)

How can bridges be adapted to face climate change?

We can find some examples of infrastructure projects where the expected climate change has been taken into account in the design and construction stages of new bridges. Among them, the Confederation Bridge in Canada always stands out. This bridge was inaugurated in 1997, is 12.9 km long and a construction cost of nearly $1 billion. It was built one meter higher to anticipate the rise in sea level during its 100 years of life span.

Furthermore, the design of adaptation measures to prevent damage due to the failure modes associated with the effects of climate change are even more complex when the bridge is in service. This is due to the fact that the measures should be based on an in-depth knowledge of the bridge structural health condition at that specific moment in time.

Regarding adaptation measures for bridges facing increased frequencies of precipitation and flooding due to climate change, these would consist of reinforcing the bridge’s foundation to avoid or minimize induced scour in piers and abutments, for example. In a very simplified way, two levels of adaptation could be considered according to the expected change in water flow:

In both cases, as additional material is placed, it is necessary to take into account its overall influence on the river dynamics and the possible blockage of the clearance between the bridge deck and water surface as a result of increased water flow.

It has been estimated that costs associated to the implementation of these type of measures in road bridges could represent an increase of around 1.5% to 2% over current road maintenance costs. Although this amount is still significant, it is small compared with the total cost of bridge failure, which can be 2 to 10 times the cost of the bridge itself if we consider in the analysis the damage associated with bridge collapse (possible accidents, injuries and deaths) and the subsequent repair or reconstruction costs.

According to a study carried out by the United States Environmental Protection Agency (EPA), for a same greenhouse gas emissions scenario, the adaptation costs are sensitive to the way in which the infrastructure is managed. It means that they vary significantly depending on the time at which the adaptation is carried out. Hence, this study concluded that proactive adaptation can reduce the total adaptation cost by almost 30%, regardless the scenario. This suggests that adapting bridges based on a predictive maintenance approach in a timely manner, in addition to ensuring safety, would also reduce the investment needed to carry out the adaptation.

Our opinion as experts.

The objective of bridge managers worldwide is undoubtedly to handle the stock of bridges under their supervision optimally. This includes a growing concern about how to adapt them to the effects of climate change.

Deciding how to adapt existing bridges and how to design new ones is complex. It must start with a risk analysis in each region together with a specific analysis of the vulnerability of each bridge. This vulnerability analysis for bridges in operation will depend on the age of the bridge, its structural health condition and the hypotheses under which it was initially designed.

It is then necessary for each manager to work on a strategy for the progressive adaptation of the infrastructure, which fortunately is increasingly being  recognised and supported at government level. As an example, since bridges are designed for a long life span (>100 years), future climate-related risk should be included in the corresponding prior cost-benefit studies.

As IDVIA, we believe that this adaptation strategy must be based on a thorough understanding of how the different effects of climate change may affect each bridge in order for it to be truly effective and minimize investment needs.

Our methodology has been developed to specifically provide that knowledge about the condition of the structure, by creating a Digital Twin of the bridge capable of representing the real performance of the structure during its service life through the continuous updating of the advanced mathematical model with the operational data of its physical twin (i.e. the real structure).

Based on the integration of mathematical modelling, both at a global level and of the evolution of the deterioration itself by means of probabilistic prognosis algorithms, and the real-time measurements recorded by the sensors installed, it is possible for us to update the prediction of the useful life of the bridge through simulations of different scenarios. These predictions are fundamental in order to be able to design bridge reinforcement that is really necessary, in this case, for effective adaptation to climate change.