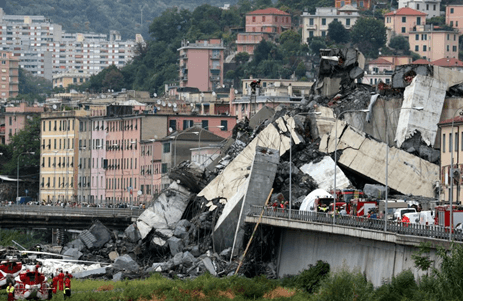 Since 2000 there have been 115 major bridge collapses worldwide, and more than 22 of them occurred in the past 2 years. Some of the bridge collapses in recent history were caused by the occurrence of natural events (for example, large earthquakes or sudden landslides) or human action (for example, related to errors during the process of construction like the premature removal of the formwork).

However, in general most collapses occur while bridges are in service and under normal operating conditions. The collapse of the Polcevera viaduct (also known as the Morandi Bridge in Genoa) falls into the latter category.

Technical data we know about the Morandi Bridge

On August 14, 2018, the Morandi bridge in Genoa (Italy) collapsed over the Polcevera river, causing 43 deaths and economic damage that will take years to repair. Autostrade per l’Italia managed this bridge, the construction of which was completed in 1967 and was designed to last at least 100 years.

With a length of 1102 meters and an average height over the valley of 56 meters, the Morandi bridge consisted of 11 spans of different lengths from 65 to 208 meters, and 12 pylons on which they rested. The deck of the bridge was 18 meters wide with four lanes for traffic, two in each direction.

The collapse occurred in one of the three main spans that overcome the Polcevera river, the railway park and some important arteries of the city, which are the only cable-stayed sections of the main viaduct. These sections were built with the “balanced system”, in which each span, of almost 210 m long, consists of cantilevered beams suspended 87 m on both sides of the axis of the piles and supported at their end by a double system of prestressed steel cables passing over a trestle positioned at the top of the masts. At the end of these beams, 36 m long cantilever sections are supported in a similar way as in the shorter spans.

This part of the bridge is an example of the first generation of cable-stayed bridges, where bridges only had one single cable per pile that acts as a fixed intermediate support. The operation of the cables is very clear: they exert a force in their anchorage with the board whose vertical component simulates the eliminated pile’s force, partially balancing the flexions due to the gravitational loads of the lintel. Furthermore, the horizontal component of the anchor causes a favorable longitudinal precompression in the deck.

Due to its operation as part of the structure, the breakage of one of the braces can cause, undoubtedly, a global collapse of the viaduct. In fact, the order of magnitude of the stabilizing reaction provided by the cable’s force is so enormous that its disappearance would increase the stress on the deck almost five times, apart from the fact that the pylon would be unable to resist the imbalance of horizontal forces derived from the absence of the cable. The dynamic effects of the break would also generate a negative multiplier effect. The pile and boards directly associated with the failed cable would irredeemably collapse.

In the design of current cable-stayed bridges, the approach is different: many more cables are added to make them function as a family of virtual elastic supports of less rigidity, like an elastic foundation; as if the board were supported by a large number of low-rigidity elastic springs.

Regarding the materials used, it was precisely the fact of having to build large spans that forced the use of prestressed concrete, a differentiating feature of this viaduct with respect to those that already existed in the rest of the world up to that time. In addition, another feature of this work are the concrete sheaths (also prestressed) that cover the steel cables of the braces that support the long spans. The piles of the viaduct were built with reinforced concrete.

Main reasons for the collapse

In the absence of the publication of the official report by the Italian Ministry of Transport, the preliminary reports and the different studies carried out by experts agree that the main cause of the collapse was the loss of one of the cables due to corrosion , which lost its resistant section up to its breakage. 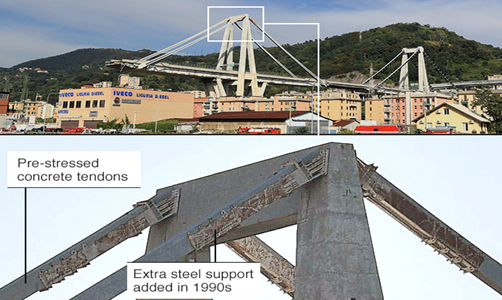 Detail of corroded pre-stressed concrete tendons, probably the main cause of the collapse (Source: ATP)

The structural materials used (reinforced and prestressed concrete, prestressed cables) have been subject to degradation of their characteristics due to the effect of atmospheric agents and the proximity of the marine environment, which influenced the resistance capacity of the bridge.

In general, knowledge of the corrosion phenomenon is not widespread to the extent that it would be necessary among engineers since the normative documents and the guidelines on the evaluation of corrosion are relatively recent.

This is because most of the concrete bridges have been built in the USA between 1940 and 1960, in central Europe between 1945 and 1970, in Spain and Portugal 20 years later: 1985-1995, in China between 1995 and today. The period of initiation of corrosion in concrete usually lasts from 15 to 30 years; therefore, corrosion is evident between 25 and 40 years after construction, depending on different situations. For this reason, this was probably the first major collapse of a bridge due to a strong deterioration of its capacity caused by corrosion.

It is possible that other factors in combination with the corrosion could have accelerated the collapse, such as the action of the wind, since small oscillations of low frequency in the bridge can sometime coincide with the natural frequency of the viaduct and produce the torsion of the board, which together with the fact that its cables were already weakened, could favor the occurrence of the disaster. Other factors, such as the accumulation of damage to the structure due to fatigue caused by the evolution of transport in general (increase in cargo and traffic volume), such as the port development of the city of Genoa, which was greater than the cargo of traffic at the time of structural design, could influence the significant decrease in its useful life.

What studies should be conducted?

Autostrade claims that the overall investment in maintenance exceeded construction costs, and that the works and the condition of the viaduct were under constant surveillance and supervision far beyond what was required by law.

For the evaluation of the state of the structure, visual inspections were carried out together with tests that consisted of indirect measures (reflectometry, sclerometric and ultrasound tests, Pull-out tests, endoscopies to analyze the stress level of the prestressed cables…) . However, unlike metal structures, it is more difficult to identify corrosion processes in concrete bridges since it only becomes visible when it is already well advanced, as the concrete itself masks its development.

Based on the conclusions of these routine inspections, one of its compensated systems (number 11) was reconditioned in 1992. In order to avoid stopping traffic, conventional and modern cables were added in parallel to the old ones to transfer part of the stresses to which they were subjected to the new cables.

However, in the other two cable-stayed systems, no major changes were made as the situation was not considered particularly serious. Like the rest of the bridge, they were surveyed through inspections and various types of tests, some of them specific to prestressed concrete structures subjected to corrosion.

Our opinion as experts

A common conclusion in the state of the art is that corrosion is the cause of large dispersions in the mechanical characteristics of deteriorated structures and that inspections of large infrastructures are difficult for many reasons.

The Morandi Bridge was known to be problematic long before the collapse, which is why signs of damage were continuously monitored. However, the Autostrade director for the Genoa area, Mr. Stefano Marigliani, said that the collapse of the bridge “was unexpected and sudden with regard to the vigilance to which the bridge was subject.” This is not unusual, but the common situation that engineers face in real cases.

The increasing aging of the bridges together with the technical limitations presented by the evaluation and surveillance through visual inspections and single localized tests on the structure make it necessary to change the paradigm in order to guarantee the global stability and security of these construction structures from now on.

Therefore, the collapse of the Morandi Bridge should be considered a wake-up call. Infrastructure managers need to move towards a smart asset management strategy that improves overall network performance in terms of reliability, security and efficiency. This strategy involves driving the maintenance of fixed infrastructure assets from a “watch and react” approach to failures to a “predict and prevent” strategy.

In this sense, the implementation of a structural health monitoring system (SHM) that allows diagnosing structural health continuously and in real time should be the standard to be implemented in each bridge. Our innovative methodology is not only capable of identifying, quantifying and locating visible and non-visible damage to the structure, but is also capable of evaluating the influence of these damages on the overall stability of the structure and predicting its evolution, being able to estimate the remaining useful life.

Once the deterioration due to corrosion of the first-generation cable-stayed bridges with concrete cables has been diagnosed, the administrators will have the information they need for decision-making. Thus, the carbonation and oxidation processes in concrete can be slowed down or even reversed by applying modern inhibitors of the very low viscosity electro-chemical reaction (and therefore high penetrating power in the concrete) or with alkalinization products that increase the pH of the concrete that surrounds the steel. Using our models specifically validated and calibrated for each bridge, we can design specific reinforcement solutions for the client.

Nuti, C., Briseghella, B., Chen, A., Lavorato, D., Iori, T., & Vanzi, I. (2020). Relevant outcomes from the history of Polcevera Viaduct in Genova, from design to nowadays failure. Journal of Civil Structural Health Monitoring, 1-21.